Jump to Recipe Jump to Video Print Recipe
Spicy, sweet and sticky pork chops in only 20 minutes!  With only 6 ingredients and one pan, these honey sriracha pork chops need to be on your must-make list!

After blogging for almost 12 years, I have lots of old posts.  Like this one.  It was originally a Donna Hay recipe called Honey and Soy Cutlets with Asian Slaw, published in 2011.  The funny part is that I didn't even like the pork chops, but I thought the slaw was good!

No sense in remaking pork chops that I didn't like, so I made up some that I did like.  The original recipe called for honey and a lot of soy sauce.  Since I was reusing the blog post url, I needed to keep some of the ingredients the same.

Honey and soy sauce sounded good, but what sounded even better was adding some sriracha sauce for some heat and a little sesame oil for even more depth of flavor.

So, without further ado, I bring you these amazing pork chops!  If you're looking for the Asian Slaw, it's now it's own recipe post. 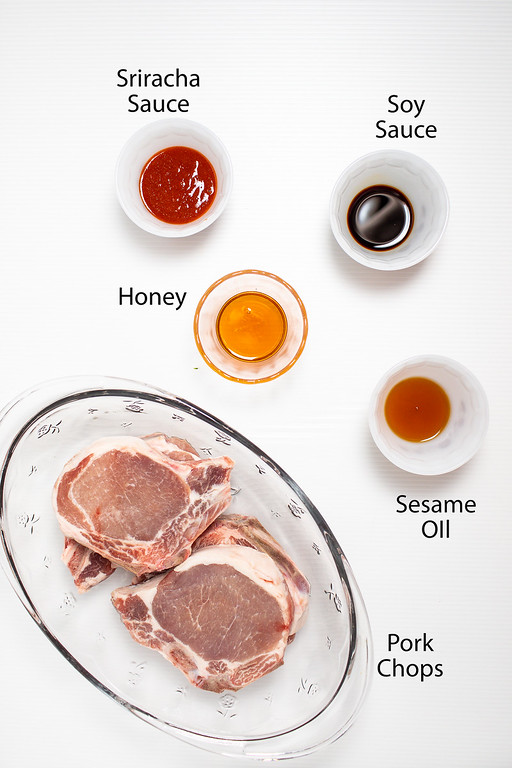 You only need 6 ingredients (not counting salt and pepper) to make these Asian pork chops! 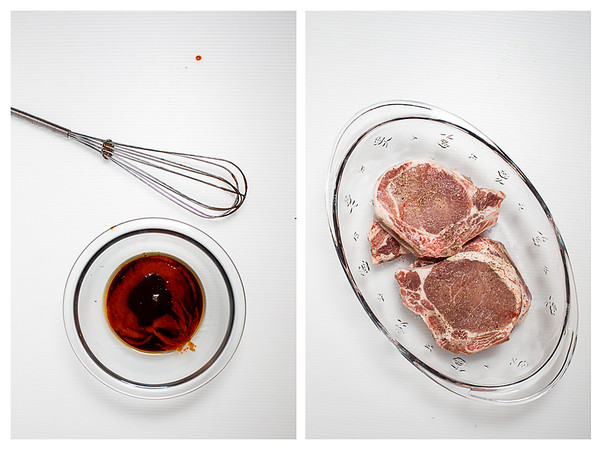 It doesn't get much easier than these skillet pork chops!

We are going to sear them on the stove and finish in the oven, so preheat your oven to 375.

Begin by whipping up the tasty spicy sauce.  In a small bowl whisk together the sriracha sauce, honey, soy sauce and sesame oil.  This sauce has so much flavor there is no need to marinade the pork chops - yay for easy weeknight dinners!

If the chops are moist, blot them dry with a paper towel, this helps with the browning.  Season them well on both sides with salt and pepper. 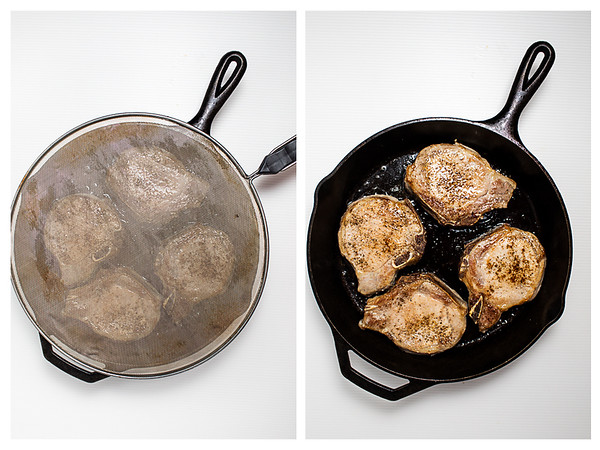 Drizzle a small amount of oil in a skillet (I love my cast iron) over medium-high heat.  When the oil is simmering, add the chops.  I like to cover with a splatter screen to make clean up even easier!

Brown on one side for 3-4 minutes and then turn over and brown on the other side for an additional 3 minutes. 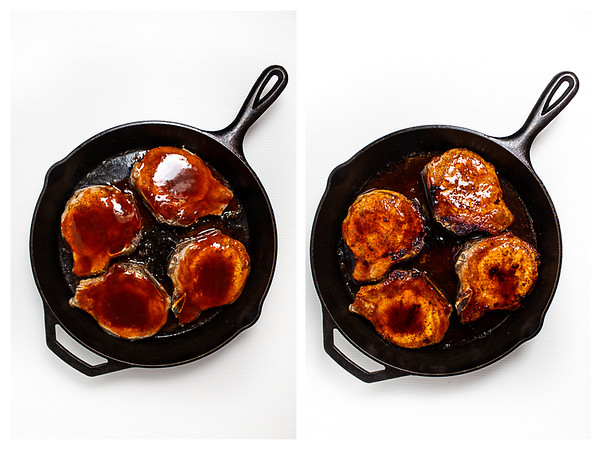 Spoon the flavorful sriracha honey sauce over the pork chops.  I don't even bother flipping them to coat both sides.  The sauce drips off of the chops and works it's way on the underside of the chops without any extra effort on your part!

Place the skillet in the oven and roast for 6-8 minutes depending on how thick your chops are.  My chops were a little over an inch and I went with 7 minutes.   You can test the chops with an instant read thermometer - pork chops should be cooked to 145 degrees.

If you want the chops a little more browned, you can turn on the broiler and broil them for a minute or two.  If you do that, you can take that time off of the roasting time.  So, if I was going to broil them for 2 minutes, I would only roast them for 4-6 minutes.

These are so good!  They are sweet and spicy, with just the right amount of heat!  Starting on the stove and finishing in the oven keeps them from drying out and makes the chops tender and juicy!

What to Serve with Pork Chops

These sweet and spicy pork chops are so easy and so delicious! Starting them on the stove and finishing in the oven makes the most juicy and tender chops!
Course Main Course
Cuisine Asian
Prep Time 5 minutes
Cook Time 24 minutes
Total Time 29 minutes
Servings 4
Calories 262kcal

If desired for more color and crispness, when there is about 2 minutes left in the roasting time, switch the oven to broil.  Bone in chops are great for this, but you can also use boneless.  Adjust the time and check with an instant read thermometer, pork should be 145.

This post was originally published in 2011 and has been updated for 2020!