Want a romantic, decadent dinner, but you need to stick to a budget?  This Pappardelle with Corn, Lobster, Pancetta and Creme Fraiche lets you stretch out a small amount of lobster into a special Lobster pasta dinner.  Post may contain affiliate links. 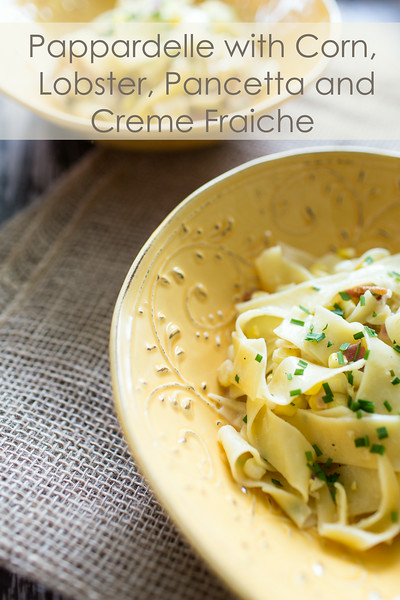 I adore lobster, but don’t have it very often.  Not just because it’s expensive, but because of something that happened probably about 15 years ago.  Mr. Sidewalk Shoes and I had gone out to eat to celebrate our anniversary.  We each chose lobster, something that was our go-to celebration dinner.  It was one of those restaurants that add the lobsters in a big tank and you could go pick yours out if you wanted.  Um.  No, thank you.  But then as the waitress was walking back by our table with two lobsters on her tray, one of them looked at me.  We locked eyes.  He looked at me and I looked at him.  That was the last lobster that I have ever ordered in a restaurant.

I am the first to admit that I am a hypocrite when it comes to food.  If I had a farm with chickens and cows, I would probably never eat meat or chicken again.  I read an article in Garden and Gun about a group of sisters who move back to their family farm in Knoxville, TN, Back to the Land.   These were big city girls who came back to their roots.  When I read about them watching a Youtube video on how to butcher chickens, and then read that they had 3 days to humanely butcher 150 chickens.  I was impressed.  I don’t know if I could do it.  I doubt very much that I could.  But then again, maybe if I was on a farm, it would all become relative, I would learn how to do it.

But anyway, back to my lobsters.  I only get them now when the tails are on sale at Earth Fare.  They are still expensive – $9.00 for two little tails, but that little bit of meat does it’s job perfectly, especially when paired with other rich ingredients.  I found Pappardelle, with Corn, Lobster, Pancetta and Creme Fraiche at Food 52.   I made a few substitutions.  I used bacon instead of pancetta, dried pasta instead of fresh,  and full fat plain yogurt instead of creme fraiche.  It was soooo good!  The small amount of lobster meat was stretched perfectly with the cream sauce and the sweet corn and crispy, salty bacon.