Sat Fat Acid Heat by Samin Nosrat - not just recipes, but how to use the four components: salt fat acid and heat to improve your cooking.  An excellent resource for the home cook and amateur chef!

Post may contain affiliate links, full disclosure on side bar. 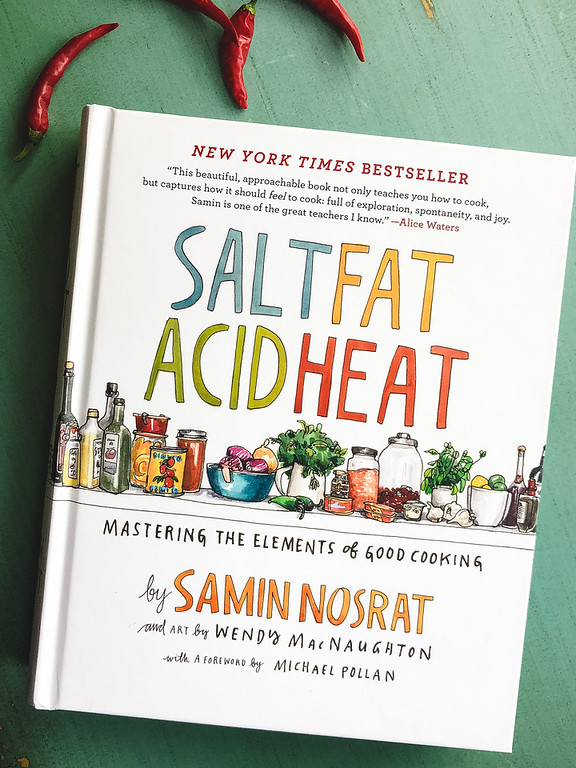 Lately, I have been feeling frustrated with my cooking.  I mainly cook from recipes, doing what someone else is telling me to do.  I've cooked for so many years, I do have a good grasp of basic cooking.   However,  I was adding that squeeze of fresh lemon juice at the end of recipe because someone was telling me to, not because I understood what that lemon juice was doing for the food.

It all started because I was watching Masterchef on tv.  It seemed like at least once per episode some chef was saying that something needed more acid.   Plus all these amateur cooks seemed to know what to do with every ingredient they were presented with.

If someone handed me some pork chops, I would go to my 200+ collection of cookbooks and find a pork chop recipe that looked good.   What I want is to be able to look at the pork chops and know what I would do with them, without having to go look it up.

So, I went searching for a book to teach me the elements of good cooking, lucky for me, one  was just published!

The first thing you notice about Salt Fat Acid Heat is that it looks a little like a textbook instead of a cookbook.   It is 462 pages with lined pages at the end for notes.   Unlike most cookbooks, it has charming illustrations instead of photos and the recipes don't begin until page 214.   To call it a cookbook would be a disservice, it's so much more than a cookbook.  It's like having a chef standing next to you in the kitchen sharing all their words of wisdom.

The book is divided into two parts.  Part one covers the four elements of good cooking:  Salt Fat Acid and Heat.  The second part covers recipes and recommendations.

Part One - The Four Elements of Good Cooking

In part one, the four elements of good cooking are covered in detail.  For example - some of the headers in the salt section:  What is salt, salt and flavor, how salt works, cooking foods in salted water, using salt, how to salt, layering salt, balancing salt, and improvising with salt.    A really useful page is a salting calendar.  In a very user friendly format, she spells out when to salt your foods, like a turkey can be salted 2 days in advance, a chicken 1 day in advance, cabbage salted 15-20 minutes before being used in a slaw.

The fat section has subtitles like:  What is fat, fat and flavor, how fat works, and using fat.  There is a two page fold out spread on The World of Fat, which was fascinating.   It covers what type of fat is used primarily by a country or region - for example India had ghee, grapeseed oil and coconut oil, while Brazil had palm oil, neutral oil, olive oil, and lard.

The acid section was my favorite, just because I'm always hearing chef's say something needs more acid.  Some of the sections in acid include:  What is acid, acid and flavor, how acid works, and using acid.

Heat was the last element covered.  The sections in heat included:  What is heat, how heat works, and using heat.   She covers everything from coddling and poaching to stewing and braising.  Again, a wealth of knowledge.

There are plenty of full, complete recipes, but there are also lots of ideas for recipes.  Just quick thoughts on what to do with an ingredient.  For example in beans, she doesn't actually have a bean recipe.  She talks about soaking them and cooking them and then gives ideas of what you might do with the beans.  She mentions a salad of cranberry beans, macerated onions, toasted cumin seeds, feta cheese and cilantro sprigs to a lunch honoring Deborah Madison.

Salt Fat Acid Heat is a book that I know I will return to time and time again.  I will probably reread it, or parts of it, several times to help the ideas stick.  So much knowledge!