Everyone loves this easy pulled pork slow cooker recipe!  Turn a slow cooked pork butt into pulled pork that you can use in so many recipes!   Only five ingredients and a few minutes of prep time!

I don't know if you noticed or not, but I've been going back through my old, old, recipes and remaking them.  This slow cooked pork butt was originally published in July of 2008!  Yes, I have been blogging that long.

The problem with being a food blogger is that you are always trying a new recipe.  With all the new recipe trying, not a lot of recipes get repeated and that's a shame.

Especially when it comes to this easy pulled pork recipe!  With only five ingredients (and one of them being beer) this pork butt braises all day long in the slow cooker.  It becomes so tender, you just shred it with a fork and you have the basis for many, many dinners! 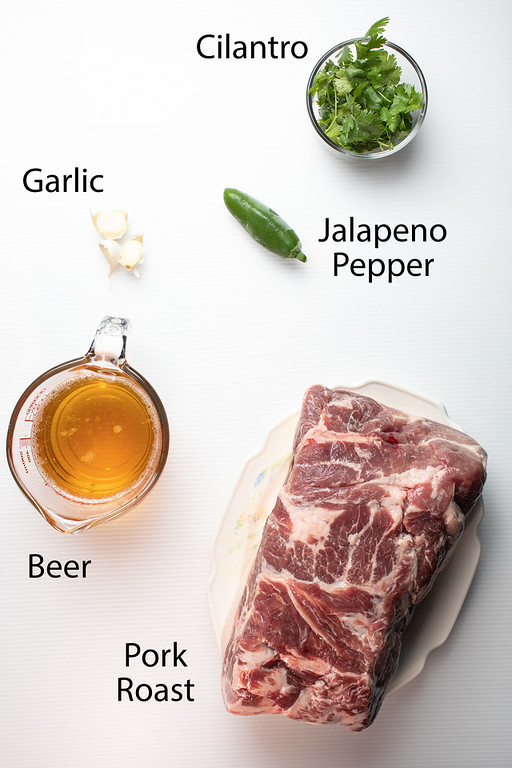 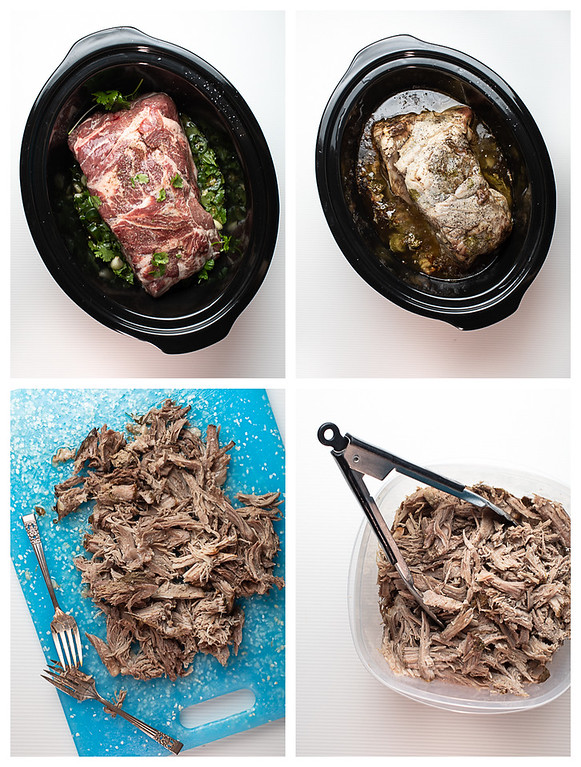 How to Make this Easy Pulled Pork Slow Cooker Recipe:

This recipe is so crazy easy!

Step one - Place the pork roast in your crock pot.  You can brown it first if you'd like, but since this was going to be shredded, I didn't bother.

Step two - Smash the garlic cloves, coarsely chop the cilantro (or leave whole) and cut the jalapeno into fourths and add to the slow cooker.

Step three - Pour over the beer.  Generously sprinkle everything with salt and pepper.

Step five - When finished, remove the pork from the slow cooker and when it's cool enough to handle, shred with 2 forks.  Skim the fat off the sauce (or refrigerate and spoon off the fat that solidifies at the top) and pour over the pork to keep it moist.

What to do with Delicious Pulled Pork?

After the pork braises all day in the beer, you are left with the most amazing moist, tender and delicious pork.  You can see my big bowl of pulled pork in the first photo!

The first night I made super easy pulled pork tacos.  I just placed some pork on a corn tortilla, topped it with some my favorite pickled onions, radishes, cilantro and some crumbly Mexican cheese.  Easy and delicious.

The next day I made pulled pork quesadillas, which were even easier than the tacos!

Even after 2 dinners and one lunch, I was able to put two bags of pulled pork in the freezer!

This Slow Cooker Chicken Vesuvio is so delicious!  Chicken thighs, potatoes and peas cook all day in a brothy white wine sauce.

You won't miss the meat in this Slow Cooker Minestrone!  Loaded with vegetables, beans and pasta, it's pure comfort food!

Love to cook with beer in your slow cooker, try this Chicken and Stout Stew!  It even has bacon in it!

Pork roast - I usually use a butt or a shoulder roast because I like how tender the marbling makes the pork.  You can use a pork loin if you'd like.  I don't typically bother browning a roast that I'm using for pulled pork.  Use the pulled pork for tacos, quesadillas, casseroles, whatever!   It freezes well, just portion it to the sizes you'd like and store in a ziplock bag, a vacuum sealed bag is great t

This post was originally published in 2008 and has been updated for 2019.