A review of The Final Seven by Erica Spindler.  Post may contain affiliate links. 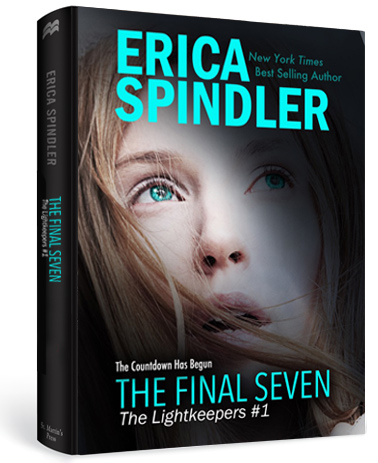 It’s been a while since I’ve read an Erica Spindler book, too many books too little time, but I will definitely not wait long for my next read by her.

opens with “Micki” Dee Dare getting called into the NOPD.  When she gets there, she is a little leery to see that at the meeting is an FBI Special Agent in Charge of the New Orleans office.  It turns out, she had good reason to be leery.  The FBI has created an experimental program called Sixers.  Sixers is a program for people with sixth sense abilities, they have attended a special police academy to help them use these abilities to solve crimes.  Micki is very dismayed to learn that her new partner is Zach Harris one of these Sixers.   Her job is to keep him alive, teach him the ropes, while he uses his abilities to fight crime. Micki is not amused.

When a coed goes missing with the number seven carved in her door, Micki and Zach are on the case.  Zach doing things his way and Micki doing them hers.  Her anger and mistrust of him, begrudgingly gets replaced with admiration as he uses his unusual skills.

The Final Seven has it all.  A murder mystery with plenty of twists and turns.  The addition of the sixth sense angle, believable but still out of the norm.  The relationship between Micki and Zach holds the novel together.    Each character true to themselves, with lots of witty banter.

I really enjoyed this one, and I am pleased to see that is subtitled The Lightkeepers #1, because I will definitely be keeping up with this series.

I received a copy of this book from Netgalley.