A review of The Restaurant Critic's Wife by Elizabeth LaBan.  Post may contain affiliate links. 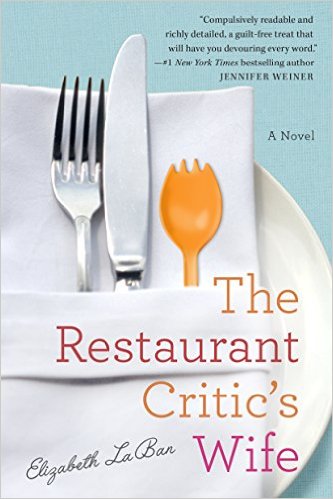 As someone who has a food blog and who also regularly reviews restaurants on another blog, I was excited to read The Restaurant Critic's Wife

. While reading it, I discovered that I hadn’t ever really given it any thought as to what it would be like to be a restaurant critic’s wife.  The answer is that it probably wouldn’t be that much fun or at least not if it’s like the way it is portrayed in the book.

The main character is Lila Soto, the long suffering wife of the restaurant critic for the Philadelphia Record, Sam Soto.  Lila was once a thriving crisis handler for a large hotel chain.  She was known for being calm and collected and able to think fast on her feet.  She loved her job, but now she is a stay at home mom with her daughter Hazel.   Her husband doesn’t want her to go back to work, he doesn’t really want her to do anything.

Sam wants to be able to review restaurants without anyone knowing who he is, so that he can get an accurate review of the restaurant.  This means that Lila can’t tell anyone what he does.  She can’t really become friends with anyone because they might own or work at a restaurant.  She can’t even let anyone know her last name.   While she can sometimes accompany Sam out to eat, having a toddler at home makes it difficult for her to do it that much.  So, she ends up spending a lot of time alone.

Their love is tested as the demands of his job cause small cracks to form.  I really didn’t care for Sam at all.  There were so many times when he put his job above Lila, not caring at all what she was going through.  I think his behavior got to be a little too extreme and Lila’s tolerating of it also a bit unbelievable.   Still, I enjoyed the story and liked that it made me think about what it would be like to be a restaurant critic’s wife.

I received a copy of this book in exchange for an honest review.